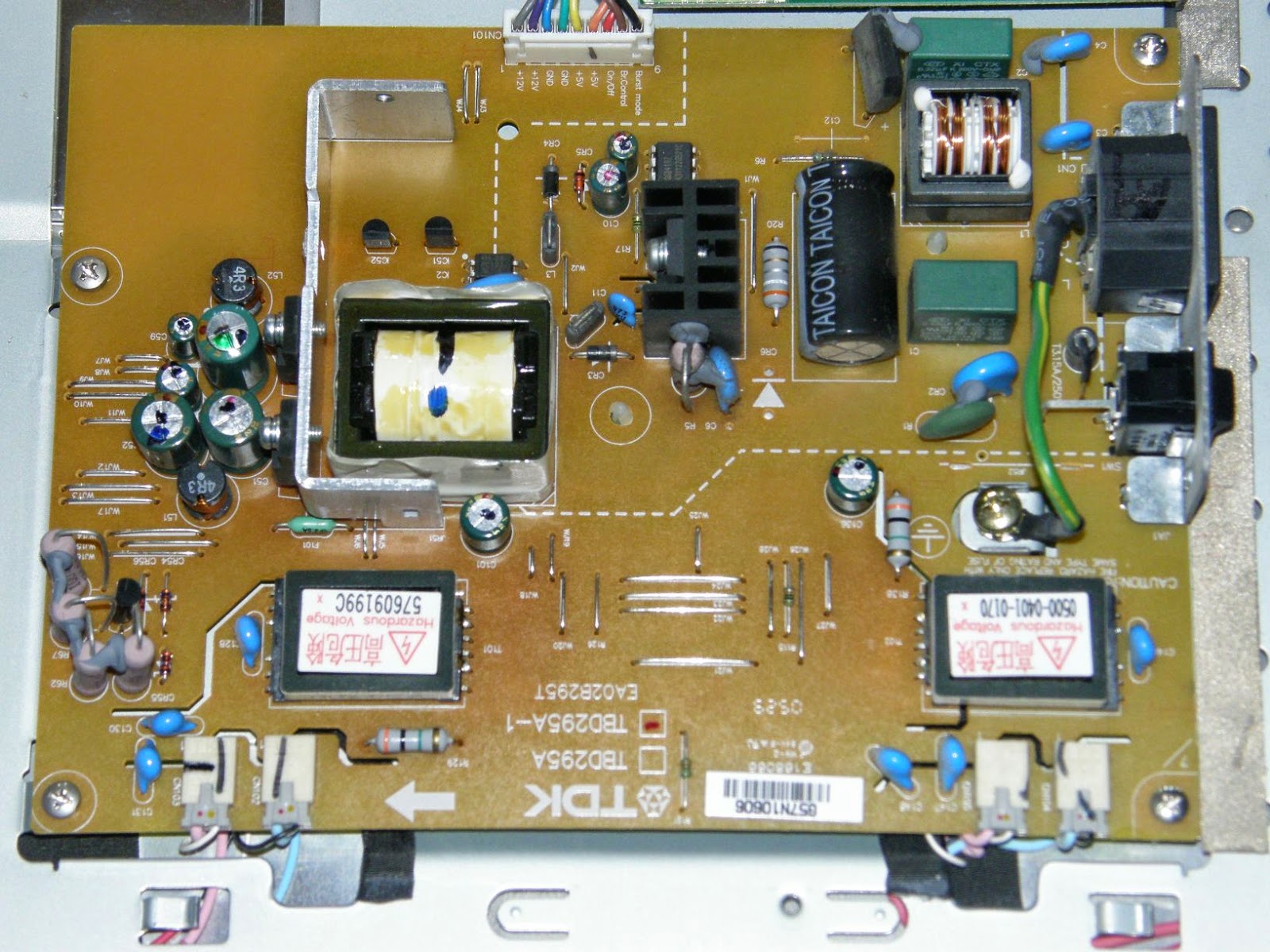 I realized I'll need a secondary LCD monitor for my vacation. I had two FSC P19-2 LCD monitors in my basement, as I was planning on fixing them one day, and the day arrived :) Those monitors were really a high end ones when I bought them (okay, high end consumer ones), sporting PVA panel and pretty good speed and size. They're 1280x1024, 19 inches.
The first one did not start properly, and if it did start, it switched off itself soon again. It dies last year, so I still remembered what was wrong with it. The second one was sitting in the basement for a bit longer, and I just barely recall the backlight died, although I am not completely sure. Anyway, after watching Dave Jones' video on fixing the LCD monitors, I felt confident I'll be able to fix at least one.
Opening it isn't that difficult. A nice guide is on Diit, however after figuring out that the two important screws are hidden under the white rubber plugs, it did not take more than a few minutes. Just demount the monitor stand first (four screws), then the two under the white rubber plugs, and then gently pry the back cover apart. The electronic is hidden under the metal sheet held by three screws around, two screws near the power socket, and the four hexagonal nuts (or how they are called?) of the DVI and VGA connector. Then slide the metal cover off the holders, and that's it.

The source of the problem can be easily spotted - see that green capacitor on the left side of the picture above, close to the heatsink? It's bulged - not much, but it is. More detailed picture on the left. All I needed to do is replacing it with similar, but working capacitor. I didn't have any new one at hand, thus I used an older capacitor I recovered from an old Pentium mainboard - and, well, that was all. After putting the LCD together again, it works, at least for now. The original bulged cap showed no capacity at all!
By the way - I used the same method for fixing our late satellite Topfield receiver. Again, replacing the bulged cap with an old one recovered from old mainboard was sufficient. If you happen to have some old mainboard from the era before those capacitor problems, don't throw them away, keep the caps! And the coils, and maybe some other stuff - heatsinks, PS/2 connectors, resettable fuses...
The second LCD (again, P19-2) was a mystery. It worked when I tried it today, although I am sure it didn't work before. The cap in the power supply that I expected to be bulged was okay. I replaced it just to be sure, and also replaced another, smaller cap nearby that looked bulged, but I did not have adequate low ESR replacement, so I'll order some and will fix it once for all.
That's pretty much for today - oh wait, three small things:
- the pre-WW2 vase with uranium-oxide paint arrived today. It looks nice, and is not as hot as I expected, showing something around 2000CPM (1mR/h). However, because of bigger active areas, there's a measurably increased radioactivity even some 20cm far from the vase.
- we had partial Sun eclipse here. I watched it for a while, and although it doesn't compare to the total eclipse I saw in 1999, it was still nice.
- the meteo node powered by a solar cell and 1F goldcap is still up and kicking. I am using RasPi to monitor it, and despite the fact the node isn't power optimized yet, and reports every 8 seconds, it's still at 3.47V (almost midnight here). The voltage drops by 10mV every 3-4 minutes and I expect it to die at around 3-4AM. With some optimizations, I am pretty sure it can make it through the night! (an afterthought - in emergency situations like when the voltage drops to dangerous levels, what about sending the meteo packet less often?)
Last but not least - I'll rework the sensor packet definition to give bigger range of voltages. Maybe one bit flag, specifying either 10mV precision as being used by now, or something like 50mV usable for higher voltages. Actually, that would be backward compatible!